New photo and video from behind the scenes of The Batman!!!

🦇 "The Batman" set photos reveal the full Bat-costume and Bat-bike! Filming on Matt Reeves’ The Batman, the first Bat-centric film to break from the Snyderverse continuity, is well under way, judging by photos of the production testing out its new bat costume and a new bat bike on set in Glasgow, Scotland. Today, photographers snapped a Pattinson-double in full kit, zipping around the Glasgow catacombs on a bat-shaped motorcycle. The motorcycle sports swept back bat ears that would surely be incredibly painful if you came to a sudden stop, while the full costume has some surprising additions: Wrist guards that appear to be full of some kind of bolt or projectile. The ears on the cowl taper to a quite slender point, and the whole outfit seems more pieced together from repurposed tactical items than created from the ground up. Usually, in film adaptations, a kludged together superhero costume denotes a hero who is still in the early stages of his career, and that may be what Reeves’ production are trying to allude to. Maybe it’s the motorcycle and lack of a cape, but it reminded this writer most of Bruce Wayne’s cobbled together Batman costume in Scott Snyder and Greg Capullo’s Zero Year storyline. Zero Year followed Batman on his earliest adventures, against the original Red Hood — who eventually became the Joker — the villainous Doctor Death, and finally against the Riddler, who turned Gotham City into a electricity-less prison where he tortured residents with egomaniacal quizzing for months on end. Paul Dano will play the Riddler in The Batman, with Zoë Kravitz as Catwoman, Colin Farrell as the Penguin, and a rumored three more “villains” yet to be announced. That’s a hefty Rogues’ Gallery for any film to sport, fueling yet more rumors that the movie is pulling from Jeph Loeb and Tim Sale’s The Long Halloween, which nearly features a different villain for every month of the year. When a character has a history as long as Batman’s there are always a wealth of sources to pull from — we’ll have to wait until The Batman hits theaters on June 25, 2021 for all the answers. How do you feel about the new Batsuit and cycle? 📸:Andrew Milligan/Getty #TheBatman 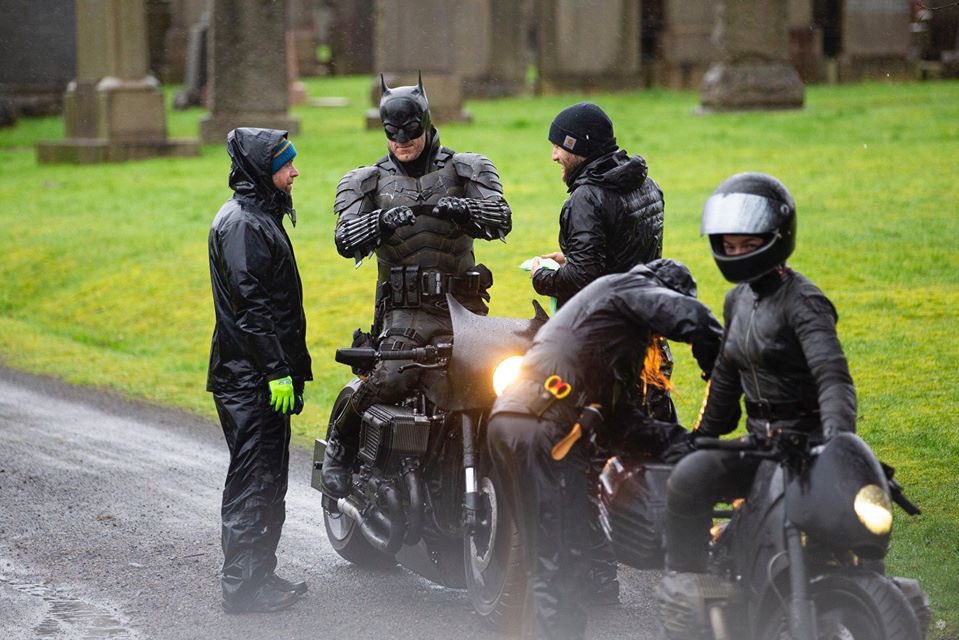 @johncusack I just watched Love & Mercy. What an incredible movie. You,the entire cast were outstanding . @Pauldano @ElizabethBanks @paulgiamattii wish I had room to name all. You guys made a beautiful film of Brian’s life & with respect.I never knew all of this @ him. Inspiring!

#TheBatman set photos have emerged online and they give us a look at the full batsuit and the batcycle 💥 - - - I think the suit looks really cool. I like the armored kind of look. Also the motorcycle is so cool! - - - - #batman#MattReeves#batmanart#comicbooks#dc#dceu#robertpattinson#batmanfamily#batmanvsuperman#batmantheanimatedseries#batmancosplay#batmanandrobin#batcycle#batsuit#justiceleague#superman#aquaman#zoekravitz#andyserkis#johnturturro#pauldano#colinfarrel#batmanbeyond#brucewayne#selenakyle#catwoman#gotham#joker#film

#TheBatman: Pattinson read about Reeves making a noir “Batman” movie and thought, “I haven’t done a big thing for ages. This is the one I want.” (His agents were shocked.) He badgered Reeves, met with him and producer Dylan Clark a number of times and finally secured an audition. He spent three weeks preparing for his audition scene only to have all his work cast aside once he put on the Batsuit. Source: Los Angelos Times 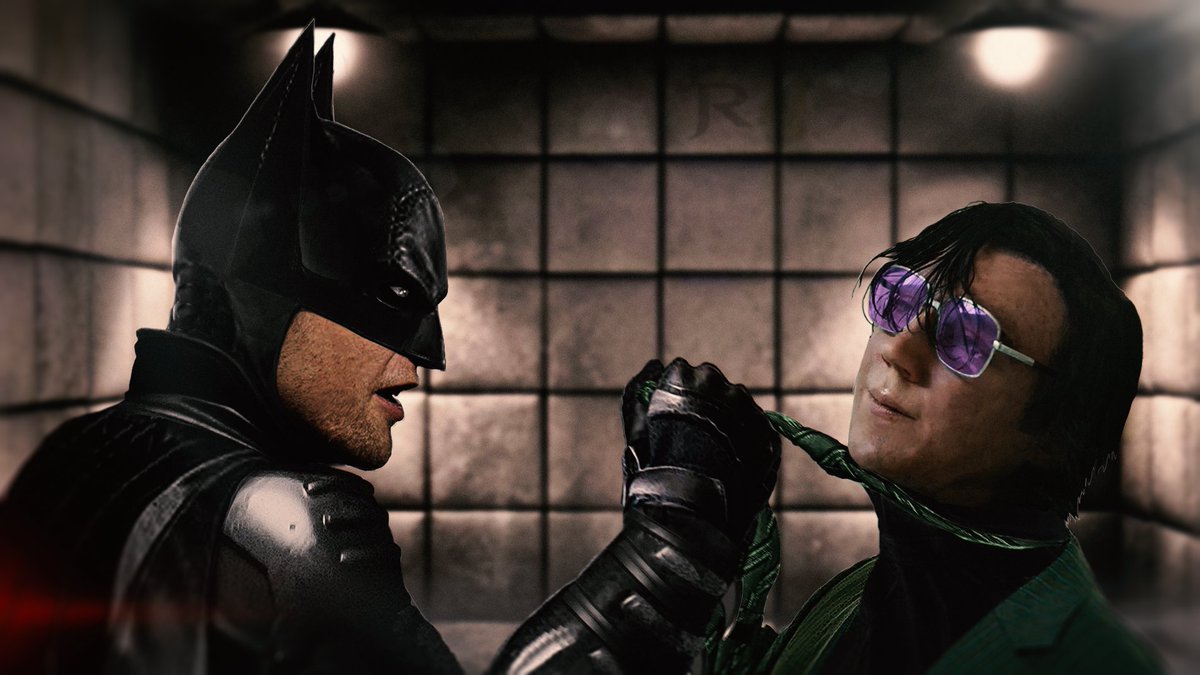 🚨Zoe Kravitz’s Catwoman Costume First Look In The Batman Movie Set Photos🚨 - Additional set photos and videos have started to surface online that seem to confirm Catwoman is involved in the scene too. As seen in the images below, the other person on the motorcycle is an African-American female, and even though only a portion of her face can be seen through the lifted visor, it does look like Kravitz - or at the very least her stunt double. Videos from the set also indicate she is working with Batman as they ride next to one another on their motorcycles. This is likely not the leather costume many expected to first see Catwoman in. After Kravitz began to sport Selina Kyle's short hair look in public, fans began hoping she would almost perfectly resemble the character. The good news is that these photos don't rule out the possibility of the expert thief having a different suit throughout the film. The motorcycle jacket could even be concealing a more comic-accurate costume, especially after Kravitz confirmed she had a costume fitting for the Catwoman suit. If Kravitz does have another suit in The Batman, then set photos could later provide a look at it. While fans will have to wait for such a reveal, something that these images and videos do appear to confirm is an alliance between Bruce and Selina. Instead of being adversaries at first, they already appear to be working together. We know that Riddler (Paul Dano) and Penguin (Colin Farrell) will be the primary foes for Pattinson's Batman, so it may very well be Catwoman who is his ally. And given the comic history between the characters, it wouldn't be surprising to see Kravitz as a love interest for Pattinson in The Batman as well. For all we know, this motorcycle adventure could be a superhero date. The Batman (2021) Release Date: Jun 25, 2021 #thebatman#alfredpennyworth#andyserkis#mattreeves#director#dceu#dc#warnerbros#justiceleague#Alfred#catwomen#theriddler#zoekravitz#pauldano#news#movie#themovieboys#colinfarrell#thepenguin#robertpattinson#JaymeLawson#jeffreywright#commissionergordon#gotham#gothamcity

NEW SET PHOTOS FROM THE BATMAN HAVE LEAKED!!!! . . Keep in mind this is a stuntman in the costume & not Robert Pattinson but it gives us an idea of what the suit looks like & the bat-cycle as well. . . Do you like the pics? Sound off!

A photo from the set of “The Batman” revealing a full look at Robert Pattinson’s Batsuit surfaced Friday, along with what could be be the caped crusader’s batcycle. Following Warner Bros.’ official reveal of the suit last week, the new photo also show what appear to be spikes on the forearms of the iconic crime fighter’s costume. Filming is currently underway in the United Kingdom which will explore Bruce Wayne’s second year as the Dark Knight. The cast includes Zoe Kravitz as Selina Kyle, (Catwoman), Paul Dano as Edward Nashton, (The Riddler) and John Turturro as Carmine Falcone. TheWrap previously reported that Andy Serkis is in talks to play Alfred Pennyworth and that Colin Farrell is in talks to star as The Penguin. Jeffrey Wright is playing Commissioner Gordon, Peter Saarsgard is playing the role of Gotham D.A. Gil Colson, while Jayme Lawson is set to star as well. “The Batman” will be released on June 25, 2021. #HollywoodCiak via #TheWrap #TheBatman #RobertPattinson #Batsuit #Batman #BruceWayne #batcycle #ZoeKravitz #PaulDano #JeffreyWright #JohnTurturro #PeterSarsgaard #JaymeLawson #AndySerkis #ColinFarrell #DCComics #comingsoon #followme 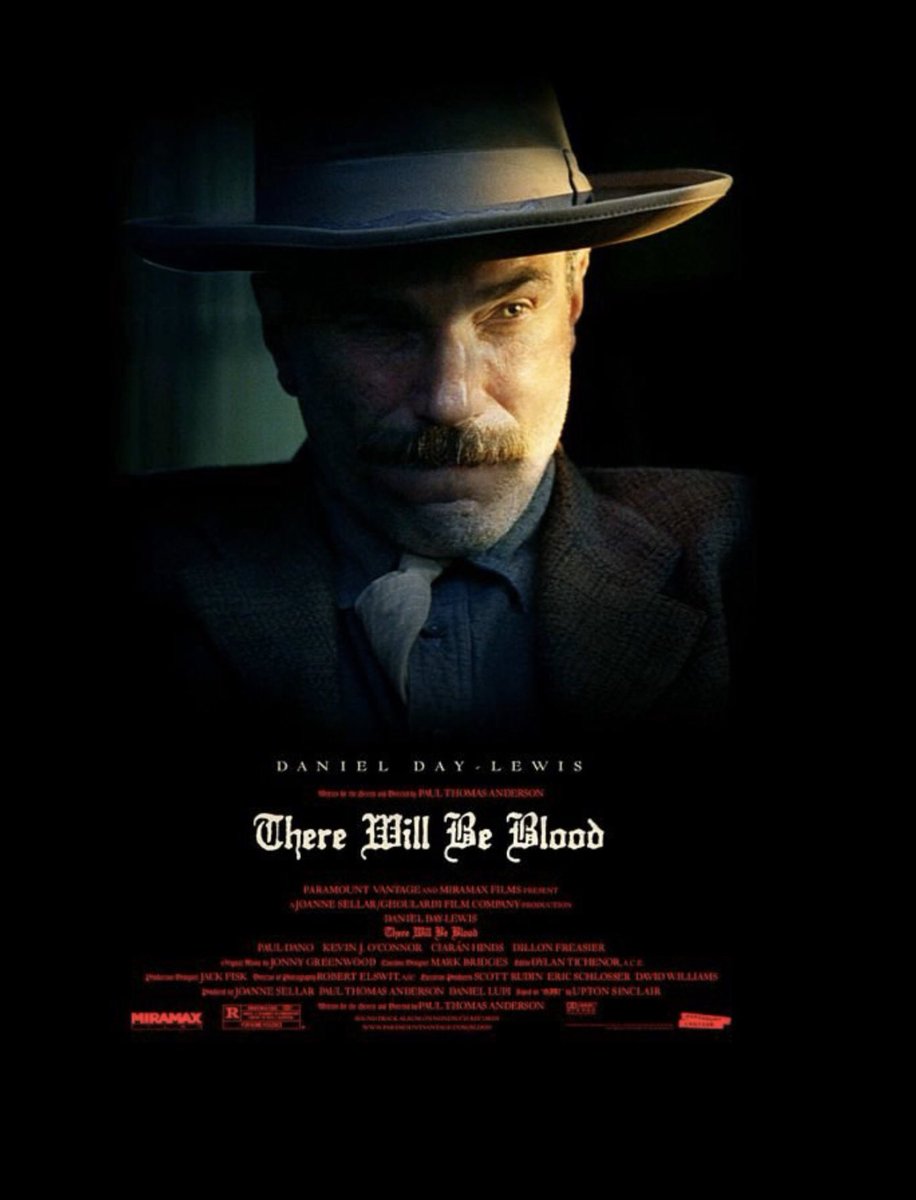 Revisited Jonathan Dayton and Valerie Faris' "Little Miss Sunshine" last night, and loved it every bit as much as when I first saw it in August 2006 at Chicago's Landmark Century Centre Cinema, where it received one of the greatest audience responses I've ever witnessed. Not only was the packed house laughing and applauding throughout, several people actually started dancing during the climax. When I interviewed the directors years later, they recalled how they had to convince Greg Kinnear to do a particular move that he felt would be out of character. It ended up bringing down the house in a way that was unlike anything I'd seen up until the climax of "Toni Erdmann" a decade later. #gregkinnear #stevecarell #tonicollette #alanarkin #abigailbreslin #pauldano

🚨Robert Pattinson’s Full Batman Movie Costume & Batcycle Revealed In Set Photos🚨 - Today, Glasgow Live posted a series of The Batman set photos that reveal a stunt performer suited up in Pattinson's Batman movie costume and riding a Batcycle. Check out some of the photos in tweets below and follow the link to see Glasgow Live's full gallery. The Batman (2021) Release Date: Jun 25, 2021 #thebatman#alfredpennyworth#andyserkis#mattreeves#director#dceu#dc#warnerbros#justiceleague#Alfred#catwomen#theriddler#zoekravitz#pauldano#news#movie#themovieboys#colinfarrell#thepenguin #robertpattinson#JaymeLawson#jeffreywright#commissionergordon#gotham#gothamcity

🌋HOLY REVEAL BATMAN!!!🌋 : This is already the 1st on set Batsuit reveal of Matt Reeves Batman! Obviously this is a stunt double for Robert, but I'm already loving his look! 😍 : Hopefully we'll get more of the on set moments of Robert as our Caped Crusader, but we'll have to wait for more awesomeness from the team of THE BATMAN!!! #dcfilms #thebatman #mattreeves #robertpattinson #zoekravitz #jefferywright #andyserkis #pauldano #colinfarrell

We finally get a full look at Batman's suit! I actually really like the suit. I think it looks very good. That mask is driving me crazy though! I really don't like it! I guess I'm going to have to get used to it, but I really dislike it. I hope it looks better in the actual movie. . . . . . . . . . . . . . . . . #warnerbrothers #warnerbros #warnerbrosstudios #dc #dccomics #dcmovies #dceu #dcuniverse #batman #thebatman #thebatmanmovie #mattreeves #robertpattinson #zoekravitz #colinfarrell #pauldano #andyserkis #jeffreywright #brucewayne #catwoman #selinakyle #thepenguin #theriddler #superman #wonderwoman #suicidesquad #harleyquinn #comics #comicbookmovies #superheromovies

someone’s getting an A

Matt Reeves has already started the production of the long awaited movie with a bang. Robert Pattinson's look is on point and has already started proving his doubters wrong. The suit, bike and set up already looks pretty damn good. The project also boasts a star-studded ensemble cast including Jeffrey Wright as Commissioner Gordon, Zoë Kravitz as Catwoman, Paul Dano as The Riddler, and Colin Farrell as The Penguin. Looking forward to see our beloved vigilante in black kicking ass, the entire Batman franchise to be revived and done justice to.

THE BATMAN is shooting in Scotland and we finally got a full look at Batman (stunt double) along with the new batcycle. #TheBatman #Scotland #MattReeves #RobertPattinson #movie #film #cinema #DCComics #catwoman #theriddler #thepenguin #colinfarrell #zoekravitz #pauldano 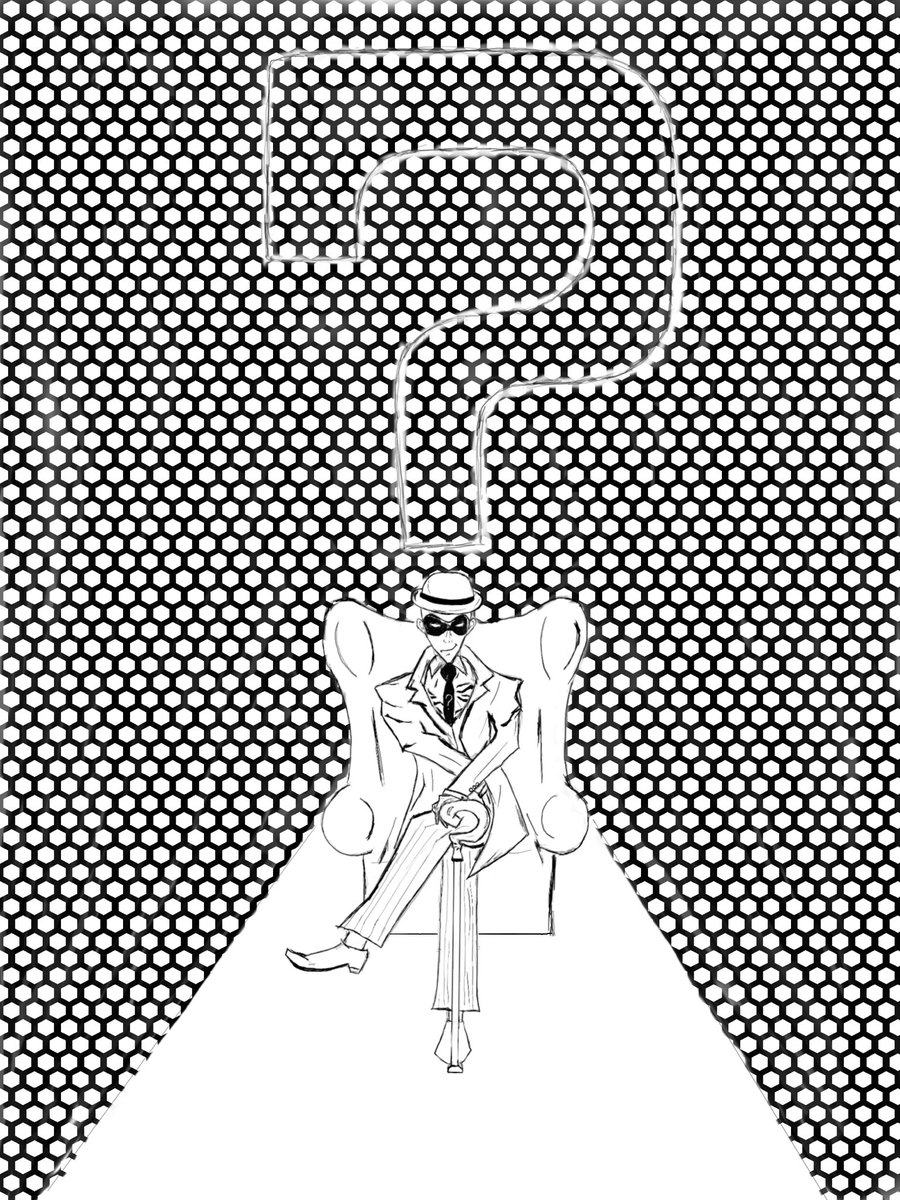 For those interested in the Batsuit. Supposedly the people up stairs aren't wanting these pictures to stay out! DM Me though. I might have something for you if you didn't see me. If you like what you see please follow and share! And I'll keep you updated on all things "The Batman" 2021 #thebatman #batmanandrobin #mattreeves #robertpattinson #zoekravitz #pauldano #colinfarrell #andyserkis #petersarsgaard #jeffreywright #jaymelawson #catwoman #riddler #penguin #alfredpennyworth #gotham #commisiongordon #dccomics #follow #longlivethebat #falcone #joker #twoface #bane #poisonivy #mrfreeze #rasalghul #zsasz #scarecrow #taliaalghul

My Top Choices for The Joker (If you leave an actor you think could play the Joker than just make a post yourself. I’m sorry but this is just my opinion on the actors range and if you disagree, that’s all fine and dandy) I’ll leave a description of the actors in the comments about why I feel they would play the Joker well @adrienbrody #samrockwell @jakegyllenhaal #pauldano #christophwaltz @lakeithstanfield3 #willemdafoe @bryancranston #andrewgarfield @bardemantarctic #davidtennant @ramimalek #joker #dc

Got to Collab with the man @houseofmat on this Batman Riddler Piece. I love how clean it turned out. Follow my guy @houseofmat Super excited for #MattReeves Batman! #TheBatman #Riddler

Surely the filmmakers had Brian in mind.