Today, our entire faculty meeting consisted of student and faculty performances of poetry, essay and song - as chosen by then to reflect on issues of identity and our culture. Interspersed were moments of reflection with peers. And it was the best meeting in a long time.

The first 100 people to comment “💗” 7 times without getting interrupted will win a follow AND a possible shoutout !

But honestly the key to this movie is that M is the Bond Girl. The poetry scene is startling no matter how many times I see it.

I wrote these verses and the hook at the age of 25. Now nearly 11 years ago to date. I remember it’s birth on a particularly dreary night. Coming home full of feelings and disconnect, and sitting down at the writing table. It had been an eventful and shocking end to another year in my young life. Followed by the effulgence of heartfelt creativity, opening up that new year and the birth of a another beautiful spring. This song marked the beginning of a new age of openness and maturity for my writing style and lyricism. I went on to write another four or five tracks, similar in self-reflection, honesty, and for me, at the time, what felt like a very sincere effort to bridge the gap between Brando the boy and Brando the man. Standing in the shoes of that man, reaching out and taking the hand of the frightened, sad and often angry child inside of myself and saying "Let’s do this together” “We don’t need to fight each other anymore” While I can now openly look back on all that has happened between then and now, I can see plenty of moments and growth spurts where I was dazed, stumbled, or strayed from that path and that sentiment. The last couple of years have been devoted to tremendous effort for growth, building healthy stable relationships, both professional and intimate, shedding, opening, and being that man that has lived inside of my heart this entire time. Most importantly for myself. Then my family, and my daughter, who I am continuously holding out hope for and prayers to be reunited with. In a love filled way, without “the legal system” dragging everybody through court in hopes of forcibly gaining access into the life of my own blood. When the stars align and the universe blows our ships together again, then it will be so🙏🏻 I deliver to you all this treasure known to me, as an intimate, shy, and hidden away part of myself until now~ Love Filled Fate~ is not about wanting to draw sympathy, unnecessary attention or anything else related to the pain body mind state. The very opposite. It’s about sharing. It’s about giving. It’s about planting seeds of hope and growing them. It’s about being a bigger man than all my demons would allow me to believe in 🙏🏻

Hello! My name is Eva, poet and teaching artist in Tucson, AZ. I write about growing up on the border to Mexico, mental illness, being queer, reflecting it all using desert imagery. I am the director of a local all ages poetry open mic that I co-founded! Hmu!

Crystalline moon Peer into my dream Ask the question To confuse the machine Drink of my soul Share my view When you descend Do you dream of me too? #micropoetry #poetrycommunity #writerscommunity #Poetry_Planet #poetry

really the best rapper of our generation, true poetry

How do you say moon in your language or any other language you know? 🌜 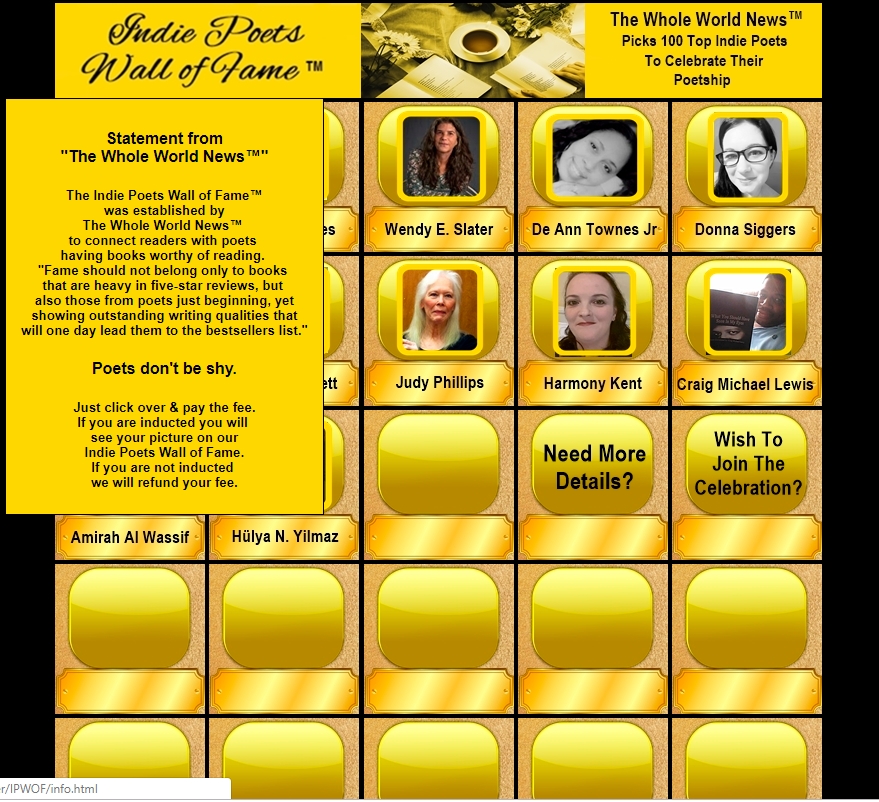 Monday is the perfect day for poets to celebrate. #Poets, the Indie Poets Wall of Fame, is calling you. https://eprintedbooks.com/publisher/IPWOF/ … #poetry #poemspic.twitter.com/L9CL4mGAUK

I'm so bored, but I'm writing poetry and I love it

Jordan, I am so grateful for your insights both on poetry and poetics. Thank you for all that you do!

“Soft light. She didn’t have to force her energy on you to be felt, or steal someone else’s to be seen. She had a way of illuminating your being just by being.” @iambrillyant

'Remember: the time you feel lonely is the time you most need to be by yourself. Life's cruelest irony.' [Douglas Coupland] I bought breathwork to the office this morning, meditating 3 times today. (and will for the next 40 days). I felt more in control. I felt stronger than the days I win at arm wrestling. I belong deeply to myself. #warsanshire #poetry #yoga #yogainspiration #meditation #breathe #yogachallenge

I love writing short stories however , poetry was just a form of expression to reflect upon life’s distractions. Now with 3 poetry books under my belt . I’m thinking about added a fourth before I finish the other three books I’ve been working on. . . . #poetry #book #workbook #amazing #bookcover #indie #author #icandothis #amazon #kindle #frontpage #news #authorsofinstagram #bookstagram #poetsofinstagram #poetrycommunity #writersofinstagram #booktalk

////CAPTION..... ♥ There were nights where I have cried, where I have lost my own self and where I have been wanting every piece me back to the form again. There are nights where I have been just laying in my empty bed with a cold heart. There are nights where I have been feeling all the loneliness in the world. There are some nights where I befriend my dark side and just listen to my depression, the only friend I had then was my wet pillow and tissue to wipe my tears out, both knew my sadness, where do you think humans were? are all lost in their world? Maybe, but not exactly everyone is lost. Some just give excuses, some become excuses. All these days when I have cried, I never craved for attention, all you will ever need is some relaxation, all we need is really some sort of happiness and some peace. Have you ever seen a wolf craving for one's attention? no, never it wants because it knows what another wolf will be capable of doing and what will it be getting when expected more. ~spoorthi.p . . . . Follow @girlwithwritings🦋 . . . ©Spoorthi P #spoorthip | Credits please, if reposted🌺 . . . . #poetry #bymepoetry #writersnetwork #poetsofindia #poetsofinstagram #poetscommunity #poetsofig #poetsociety #writerscommunxity #writersofinstagram #writersofig #aestheticquotes #poetryisnotdead #poemoftheday #photography #typography #recoverysayings #justlifequotes #terriblytinytales #girlwithwritings

You need that friend that's going to tell you when you're wrong. Not applaud every stupid decision you make just because you are friends. . . . #photo #instadaily #instapic #instagood #lfl💛 #lfl #fff #quotes #poem #poetry #heybiblee #photography

three and a half hour bus trips are always inordinately exhausting. i can never tell which is worse, the boredom or the monotony or the claustrophobia. either way, unless you rarely bus travel, long trips can be a bit of a nightmare. eventually you learn to make the best of it, and always remember bring a good book. . . . . . . #pdxtoseattle #todayiread #poetry #poetrycollection #travelweary

Hey, so basically my Instagram is gonna be me, my poetry, advice, self care, positivity etc. ✨💞 #selfcare #advice #poetry

"im not a sad person" i say, my phone buzzes you see the post notification for the Richard Siken poetry bot and realise you have caught me in a lie

Repost untwineme.usa  Featured writer/artist on #untwinemeusa  bits_and_peaces21 Another piece by Krystin. Her caption reads: "Kintsugi is the art of broken pieces. Objects are repaired with gold because the flaws are seen as a unique piece of the object's history, only adding to its beauty. Our 'flaws' do not make us less than. They add to who we are and to the spectacular beauty of our wholeness. 💛"🙏 • • • Please tag #untwinemeusa for feature opportunities. • • • Check out the other Untwine.Me feature sites showcasing writers from all over the world 🌎 • • • Curated by thepoetbiz • • • #poetsofinstagram #poetsofig #poets #poetry#poetrycommunity #creativewriting#writerscommunity #writersofig#writersofinstagram #spilledink #instapoetry#poemoftheday #quoteoftheday #inspiration#inspirationalquotes #writing #inkdrawing#doodlesofinstagram #feature #untwineme

Thanks to @BabyTeethArts for publishing my poem, Going home | the unpronounced alphabet. Please support our small publishers. #poetry https://twitter.com/BabyTeethArts/status/1232094148091469824 …

About to turn 30. Living in Arlington with my husband and toddler. Teaching. And beginning to write poetry again for the first time in a long time.

Heartbeats by Miles T. Ranter They tell me, world, you’re waves—unreal. Yet when I love you, ... http://tinyurl.com/unc5bo5  #poetry

/It’ll be alright, my darling, it will be fine/ 💛⛅️ #writer #writing #write #mine #juliareneepoetry #poem #poet #poetry #thoughts

how are you today? . . . . original quote by: LovelyTheBand . . . . follow @0512words for more . . . tags: #0512words #poetry#poetryofinstagram#lovequotes#words#read#quoteoftheday#quotes#instapoet#quotepage#sadquotes#inspirationalquotes#lyrics#songlyrics#creativewriting#wordsofwisdom#inspirationalquotes #dailyquotes#writergram#diary#dream#motivation#schoolmotivation#tips#love#student#homepage#meme#likeforlike#followforfollow#inspiration

I write sci fi, fantasy, romance and occasionally a poem or two. Visit http://rossmyles.co.uk  where you find my #blog, my novels and a bit about me. #writers #amwriting #poetry pic.twitter.com/oOpcIKLZ9V

O he whose name is a remedy, whose remembrance is a cure & whose obedience is wealth. Have mercy upon him whose capital is hope & whose weapon is tears! O, ample in blessings! O, repeller of adversities! O, light of those who are lonely in the darkness!. 🤲🏽 Dua Kumayl. . . . . . #podcast #graphicdesign #allah #architecture #entrepreneur #contentcreator #muslim #islam #muslimah #creative #weekend #goals #womenintech #mentalillness #tech #mentalhealth #flowers #business #womeninbusiness #photography #books #film #duakumayl #design #dua #travel #poetry #quotes #explorepage

Finding uses for the scraps of watercolor paper I had given up on but couldn't say goodbye to. • • • • • • I wrote the first poem for my husband for Valentine's day. He's a corporate attorney, which means I pour myself into thoughtful prose/art and he is delightfully confused when I present it to him. Art isn't his thing, which is nice because we kind of have that clean cut business guy with his bohemian teacher wife thing going on and we find that charming. • • • • • • • • • • • • • • • #watercolour #watercolor_artist #watercolorart #prose #poetry #watercolorist #poetsofinstagram #writersofinstagram #writing